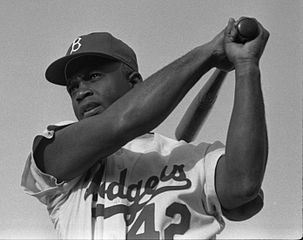 Does the number 42 mean anything to you? Many Americans remember that the number 42 was worn by Jackie Robinson, the first African American to play major league baseball for the Brooklyn Dodgers.  When Dodger President and General Manager Branch Rickey signed Robinson, Rickey told Robinson that he was picking him because he believed that he could stand the racial animosity that he would be receiving as the first Black in baseball. While one fellow Dodger tried to undermine Robinson’s talents, abilities, and perseverance another recognized the pressure on Robinson. Duke Snider, his teammate, reported,

“He knew he had to do well. He knew that the future of blacks in baseball depended on it. The pressure was enormous, overwhelming, and unbearable at times. I don’t know how he held up. I know I never could have.”

Rickey knew that Robinson would never make it as a good Black baseball player but as a great baseball player. He recognized the hostility and anger that existed against bringing this great athlete who happened to be Black to a sport that had been White and had White fans that depended on seeing their own playing the game. Rickey is reported to have said,

“There’s virtually nobody on our side. No owners, no umpires, very few newspapermen. And I’m afraid that many fans will be hostile. We’ll be in a tough position. We can win only if we can convince the world that I’m doing this because you’re a great ballplayer, a fine gentleman.”

All this happened in 1947. Decades later, another Black athlete is playing in a sport that has also been dominated by Whites. Joel Ward, a Hockey player for the Washington Capitals wears number 42 in honor of Robinson. What happened to Ward when he scored the winning goal in a victory clinching the series over the Boston Bruins on April 25, 2012? For those of you who believe that Obama’s election and the major league’s celebration of Jackie Robinson means that racism in America is dead, please click the link below and see what many everyday people had to say about Mr. Joel Ward.